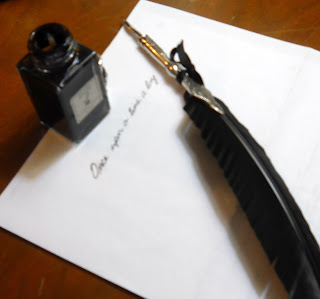 Once upon a time a long, long time ago, in a land far, far away lived a girl who spent her time dreaming up stories of fairies and magic and mystical lands.  Words flowed from her pen, committing them to one page after another.  That is when she knew she wanted to be a "Writer.".

Then one Christmas Santa Claus gave her a red and cream typewriter, with it's own case.  She could bring it everywhere she went and she did. Now she pounded keys to form the words that shaped her stories.  The tales no longer only existed in her head and her dreams.  But dare she call herself "A Writer."No, she daren't.

So she had to look twice when reading the new blog  Real Women, Real Stories  created by fellow blogger Len Lambert to see her name listed on the Our Writers page.  What a surprise!  Someone actually graced her with that lifelong coveted title.  So let me tell you......she was walking around with a big silly grin on her face until a thought crept into her consciousness and struck terror in her. What if she doesn't live up to the title her friend Len so graciously bestowed on her? What if the words she commits to paper are just plain yawn inducing?   So what do you think she decided to do?  She decided not to think about it and delight in the thrill of being called "Writer."

What is Real Women, Real Stories?  It began as "an idea by Michelle Alba Lim to gather stories from women in her circle, ones she had met over the years and that she admires. But after a year, the plan evolved into gathering stories from women worldwide, with uplifting and inspiring stories that we can share to the world by turning them into a book.


Most importantly, a percentage of the proceeds will go to:
International League Against Epilepsy.

We are looking for more stories before the first draft is submitted to the editor. Please hurry and submit your story. Once we've reached 21 stories, we will inform you if you've made it or not. Don't despair if you haven't made it. There are plans for a Book 2, depending of course to the number of submissions to complete another book project. In the meantime, please help us make this book project a success!"

Stop by have a gander, join the group.  I am going to head over there again for at least the 100th time tonight and gaze at my name under the page heading of "Our Writers."

Labels: Anthology, International League Against Epilepsy, portable childs typewriter, stories, writer
Newer Posts Older Posts Home
Subscribe to: Posts (Atom)
James Dickey said,"There are so many selves in everybody, and to explore and exploit just one is wrong, dead wrong."